Vinyl is the latest HBO series to hit our screens, and after its premiere on NEON, we can certainly say we’re addicted. After all, when Martin Scorsese, Mick Jagger, Rich Cohen and Terrance Winter come together to produce a series you can only assume that you are going to see TV gold. The 1970s set period drama plays host to a complete depiction of the sex, drugs and rock ‘n’ roll lifestyle some 40 odd years ago, along with some fantastic acting and of course, some even better music. So, if this sounds like a bitta you, here are our 5 reasons why you need to start watching Vinyl ASAP. You’re welcome.

1. It’s created by Martin Scorsese, along with Mick Jagger – need we say more?
Yes, the man who bought us The Wolf of Wall Street and Boardwalk Empire has been at it again, and you can tell that Vinyl is a Scorsese creation from the moment you start watching. The sharp, quick-moving camera shots around the flawlessly fashioned sets ooze Scorsese style and the seamless shooting between scenes and different rooms mimics Wall Street’s captivating charm. Combined with Jagger's first hand knowledge of the era and the lifestyle it held, the producers behind Vinyl are just one of the many reasons why we are hooked already.

2. The storyline is something we haven’t seen before.
The series is set in 1973 New York City, and rather than focusing on those that were fronting the music industry at the time – think Led Zeppelin, Pink Floyd and The Rolling Stones – it presents the lives of those behind the scenes: the record labels and executives that helped shoot these bands to fame. Bobby Cannavale plays the lead role of Richie Finestra, a record company boss who is on the verge of losing his record label and his wife. The storyline is super refreshing and moves away from the typical depiction of the rocking '70s, by showing us what was going on behind the closed doors of those who made it all happen.

3. The portrayal of the sex, drugs and rock ‘n’ roll lifestyle is a welcomed change.
As much as we love indulging in marathons of Suits, Orange is the New Black, and Blindspot, Vinyl gives us something that the others don't - a look at the fascinating side of the drug-taking, cigarette-smoking, drunken antics of the rock star lifestyle back in the day. Within the first few minutes of the premiere, we are introduced to Richie Finestra, as he is snorting copious amounts of cocaine. From this point, we knew Vinyl is going to be one hell of a ride!

4. The names you've heard of, and the ones you'll soon be hearing of a whole lot more.
With mega babe Olivia Wilde, Juno Temple, and Ray Romano (yes, the guy from Everybody Loves Raymond), we can see why the cast of Vinyl may sound like a slightly odd mix. However, upon watching the show, you can see why each role was cast as it was. Wilde plays Richie's wife Devon in spectacular fashion, with Temple starring as Jamie Vine, an A&R executive who thrives on the chaos that the industry brings. Mick Jagger's son James Jagger stars as Kip Stevens, the lead singer of Nasty Bits, a punk-rock band, and does so incredibly well - he is for sure one to watch, as are so many of his other fellow cast-members.

5. From flared jeans to printed platforms, the fashion is a dream!
Considering Remix is a fashion magazine, we couldn't write about Vinyl without mentioning the fashion! With the '70s revival we are seeing in fashion lately through flares, bohemian prints, and vintage-inspired designs, it's hard to not fall in love with the costumes in the show. When designing the fashion for Vinyl, John A. Dunn, the show's costume designer, said he managed to get his hands on a heap of genuine vintage pieces which can be seen throughout the show. If that isn't a reason alone to watch Vinyl, we don't know what is. If we’ve already gotten you as hooked as us, give Vinyl a try by signing up to a free 30 day trial of NEON, beware though: with it you’ll not only get Vinyl, but you’ll have access to every other amazing addictive show, like The Wire, Game of Thrones and Girls, plus a whole range of new movies, so it might be wise to tell the friends they won’t be seeing much of you for a wee while.

Latest Issue Mtv Is Looking For A New Tv Host And ... 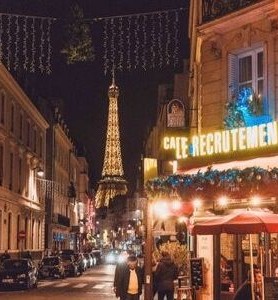 Six European destinations you need to visit at lea...