Cancel your plans and get to The Civic Theatre ASAP, because the wonderful, whacky world of Matilda the Musical is absolutely unmissable.

Roald Dahl's much-loved story becomes larger than life on stage thanks to an outstanding soundtrack, attitude-laden choreography, an intiricate, interactive set, the cartoonish flair of the adult characters and the most insanely talented ensemble of children. Honestly, you have never seen kids like this before.

With more than 70 international awards, including five Tony Awards, Aussie-grown Matilda the Musical's arrival in Auckland had everyone hyped long before the curtain rose. By the end of the opening number, Miracle,  you're already slumped in your seat, wondering how you could ever compete with the talent of these small children - the bratty ensemble harasses a party performer while their parents coo over how special they are. The cast introduces you to the hilarious, clever lyrics of Tim Minchin, a raucous orchestra and astounding choreography, flawlessly executed by adults and children alike.

Four pint-sized performers share the title role - Izellah Connelly, Annabella Cowley, Venice Harris and Eva Murawski. Izellah took on the role last night, and her first number Naughty astounds you with her voice, attitude and dancing. Matilda, the child prodigy, uses her intellect (and later, magic) to rebel against nasty adults. Her 'rotten parents' make it clear she was never wanted, mock her genius, think books belong in the bin, and wish she was a boy.

Their awfulness is only trumped by the comical, monstrous headmistress Miss Trunchbull (James Millar). The audience loves to hate all of these evil adults, who put on sensational performances of their own. Prepare for the hilarious salsa number by Mrs Wormwood (Kay Murphy), and Trunchbull's The Smell of Rebellion, an ode to her strict discipline of the 'maggot' children, showcased by a gruelling Phys. Ed class.

The show is carried by the kids, who perform ridiculous acrobatics and dance numbers, with stellar voices and unrivaled energy. The first number of the second half, When I Grow Up, is visually and musically one of the most wonderful pieces of musical theatre out there (the song is STILL in our heads!) and shows off the ultimate in songwriter Tim Minchin's talent.

We follow these lovable kids as they revolt against the rule of Miss Trunchbull, often with Matilda boldly standing up for them, right through to the sensational closing number, Revolting Children.

There are no wasted moments in Matilda, from upbeat dance numbers to heartbreaking moments with pitch-perfect Miss Honey (Lucy Maunder), to the grotesque humour of Miss Trunchbull on the warpath and equally hilarious performances from Matilda's parents, a cameo from the Russian mafia and a few tongue-in-cheek jokes just for the adults. The colourful set is a star in its own right, as is the incredible choreography.

The resounding standing ovation says it all really. No one was completely prepared for a musical as genius as the tiny heroine herself. Matilda comes down to outstanding performances from all involved and some of the most clever, catchy music in modern theatre. Believe the hype, and prepare to be blown away. Whether you're young or old, theatre fan or not, you need to see Matilda.

A Night Of Gatsby 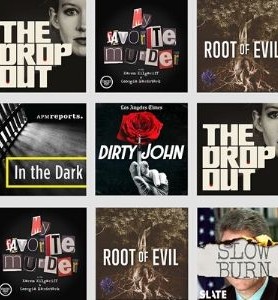 The best true crime podcasts to binge in 2020