If you're anything like us, you love a good celebrity romance. There’s something about a Hollywood couple that just leaves people wanting more, and it seems that their heartbreaks are (sadly) our heartbreaks. Over the years, Hollywood has seen plenty of makeups and breakups, which have pulled on all our heartstrings, but there are a few certain couples that we have invested a little more time and emotion in than others. In honour of another Valentines Day been and gone, we take a look at the 10 best celebrity couples over the years...

1. Kate Moss & Johnny Depp
Johnny and Kate were THE ‘90s couple, and despite their tumultuous relationship, they top our list for obvious reasons. What other couple steps out for the first time in matching stylish leather outfits? Exactly. The pair were ridiculously cool together, and through their coordinated clothing, many red carpet appearances, and short engagement, we didn’t realise how much we loved them 'til it was over.

2. Kurt Cobain & Courtney Love
What other couple would get married with the groom wearing pyjamas as he was 'too lazy to put on a tux'?! Although their relationship was relatively short lived due to only meeting in 1990, and Cobain's tragic death in 1994, Kurt and Courtney were the ultimate grunge couple in Hollywood. Bonding through their love of the rockstar lifestyle, these two were completely inseparable, with Cobain describing Courtney as his 'goddess.'

3. Justin Timberlake & Britney Spears
The pop star, double-denim wearing couple that nobody will ever forget about! Britney and J.T. were in our opinion, music's most adorable couple. And it was because of this fact, that hearts were broken worldwide when the two Disney stars called it quits after three years of dating. Britney has since revealed that Justin was her first kiss, when she was just thirteen. Awww.

4. Winona Ryder & Johnny Depp
Yes, Johnny Depp is making another appearance on our list, but for good reason! The actor met Winona Ryder when she was just 17 and he was 27, at a 1989 film premiere. Despite the age difference, the two were engaged just a year later, and remained that way until 1993, when they split. Unfortunately for Depp, he had 'Winona Forever' tattooed on his arm, which has since been changed to read 'Wino Forever'.

5. Heath Ledger & Michelle Williams
After meeting on the film set of Brokeback Mountain in 2004, the co-stars begin dating and were quick to fall in love, only a year later having their daughter Matilda together. The two split amicably in late 2007, and sadly Ledger died of a drug overdose just months later. However, Michelle's love for him has lived on, with her publicly expressing her heartbreak, and stating that Heath's spirit has survived through their daughter.

6. Brad Pitt & Jennifer Aniston
Although we love Brad, Angie and their brood of kids, Brad and Jen will always have to be our favourites. It really seemed like a love story that was going to last. However, five years into their marriage that was considered to be a rare Hollywood success, Brad and Jen announced they were separating, much to many's dismay. He went on to become one half of Brangelina, and Jen has gone on to marry Justin Theroux, but we will never forget the love story that once was.

7. David & Victoria Beckham
One of the three couples on our list that are actually still together today, Posh and Becks are the epitome of the Hollywood super couple. They have gone through at least 29 hairstyles between the two of them, and have impressively managed to survive the curse that Hollywood seems to have on the couples it plays home to!

8. Tom Cruise & Nicole Kidman
Cruise and Kidman were together for over a decade, after meeting on the set of Days of Thunder. They went on to play couples in two more movies, with their on-screen romances soon being mirrored in reality. Unfortunately, the pair did split in 2001, however not before adopting their two children, Isabella and Connor.

9.Nicole Richie & Joel Madden
Nicole Richie has come a long way since her days on The Simple Life with ex-best-friend, Paris Hilton. Richie and Good Charlotte frontman Joel Madden began dating in 2006, and the rest is history. The two are one of the few rock-solid relationships in Hollywood it seems and we hope it stays that way, because we love them, and their super stylish red carpet appearances together!

10. Beyonce & Jay Z
Of course, no celebrity couple list would be complete without Mr and Mrs Carter. If one thing’s for sure, it is that Bey and Jay are rock-solid and are continuing to conquer the world. Beyoncé’s recent Superbowl domination has been her focus while Jay Z’s streaming site Tidal is playing host to some of the best latest music. If that’s not the ultimate power couple, we don’t know what is!

Things to do this weekend: Auckland’s first-ever G… 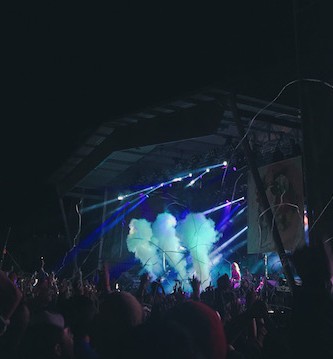