29-year-old actress Emilia Clarke is one foxy lady. The English-born beauty is most known for her role on Game of Thrones, but there’s a lot more to her too. Here are five reasons why we love Emilia Clarke.

1) Her character on Game of Thrones is badass
There is no denying that Daenerys Targaryen in the hit HBO series Game of Thrones, now onto its sixth season, is an incredibly cool character. She’s fire resistant, a Mother of Dragons, a fighter for justice and yet, at times, a ruthless killer (for legit purposes, we promise). We couldn’t like her more. All of this comes across thanks to Clarke’s outstanding performance. She has been nominated for two Emmy Awards in 2013 and 2015 for Outstanding Supporting Actress in a Drama Series.

2) She accepts her body for how it is
In a Teen Vogue video, Clarke gives some words of advice to her 18 year old self. She discusses relationships and realising your dreams, but mostly she talks about body acceptance. '18 year old Emilia,’ she says, ‘I’m going to quote the sunscreen song at you – I know you know it. You are not as fat as you think you are.’ She goes on, ‘There are some women who look some way, and there are other women who look another way. Like a whole other way. And the way that the other women look people love. Because they look like women.’ Clarke is encouraging people not to try to fit into an ideal body shape, but to accept how you are, naturally.
In a recent Game of Thrones episode we saw Clarke as she was – entirely nude. In the past, like the other characters, Clarke had a body double to perform scenes involving nudity. This time though she chose not to. Clarke told Entertainment Weekly, ‘This is all me, all proud, all strong.’ She’s certainly practicing what she’s preaching.

3) She’s a hottie
We love that Clarke is encouraging people to accept how they look. That being said, Clarke is incredibly beautiful. She was voted the most desirable woman in 2014 by Askmen readers and last year she was named Esquire’s Sexiest Woman Alive. While Clarke is beautiful, feminine and strong, we think it is her confidence which makes her so attractive to others. Clarke is confident in who she is and this gives her a charisma and sexiness. Lesson learned: accept who you are and own it.

4) She doesn’t take herself too seriously
Another reason why we love Clarke is that she has a great sense of humour. After her Game of Thrones audition, she tells Jimmy Fallon on The Tonight Show, she did the funky chicken dance which ‘kind of morphed into the robot.’ She had asked the director if there was anything else she could do and jokingly he had told her to do a dance. So she did. We wish we could have been there to see it!

5) She is the star in the popular new film Me Before You
Me Before You has just hit the cinemas and if you haven’t already, you must go and see it. Clarke plays the funny and quirky Lou Clark in a heartbreaking romance based on the Jojo Moyes novel. On the Graham Norton Show Clarke admits that Lou’s character is the most similar character to herself that she has ever played before. ‘I’m not really like Khaleesi,’ she says of her tough, intimidating (but badass) Game of Thrones character. While Daenerys is an amazing character onscreen, we are glad that Clarke is more like the lovely and funny Lou!

Premiere: What the cast of Gilmore Girls wore 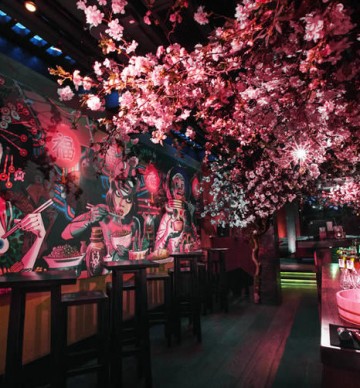 Wine and dine under 1,000 cherry blossoms